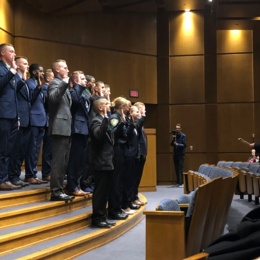 DAYTON, OH – Sinclair College will host a graduation ceremony to honor 16 graduates from the Sinclair Police Academy. The event will take place on Thursday, October 31, at 3 p.m. in the Smith Auditorium of the Sinclair Conference Center, Building 12, in downtown Dayton. The ceremony is a celebration for the graduates, their families, and the college administrators and faculty who oversee the police-training program at Sinclair.

“Today marks the graduation of our 115th class of police cadets,” said Pete Willis, Training Coordinator of the Sinclair Police Academy at Sinclair. “The Sinclair Police Academy has had more graduating classes than any other competing programs in the region. We have had a diverse group of students in this graduating class — a number of military veterans and many that are making a transition from other career fields. Two of the graduates from the program have already obtained employment as officers in the Dayton region. It has been a pleasure working with this great group of students. Many of them are passionate about serving their communities in one of the most demanding roles in existence.”

“Over the last sixteen years, Commander Pete Willis has overseen the Sinclair Police Academy,” said Jenna Beck, Chair of Law and Public Safety at Sinclair College. “He has done an amazing job implementing rigorous standards that ensure we graduate quality cadets. Commander Willis will be retiring at the end of the year, and this is his final graduating class. We are so grateful for all of his work, and this final class reflects the type of superb talent Commander Willis has cultivated over the years.”