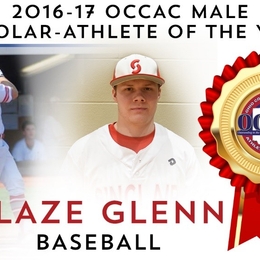 Blaze Glenn (FR/3B – Toronto H.S) achieved a 4.00 GPA in the classroom this year, while making the OCCAC's All-Academic team and the Dean's List at Sinclair in the fall and spring semesters.  He was also named NJCAA 1st Team All-Academic for achieving a perfect 4.00 for the academic year.

In the community, Glenn donated blood with his team during the annual blood drive and volunteered at the Buddy Walk, Strides Against Breast Cancer, Sinclair Veterans Day Walk, Martin Luther King Jr. Walk and Light the Night. He also helped serve Thanksgiving dinner at the Dayton Boys and Girls Club.